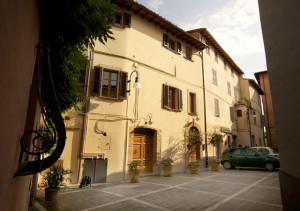 The reality of living on two different continents means that I’m not always sure where I am these days. Friends in New York forget the time difference when they call, invite me to parties I can’t attend, or consistently ask when I am coming home. But the answer is “I am home.” Four years later (and I can’t tell you how much energy and money later), what was once an abandoned wreck, has come back as a palazzo filled with people, dogs, and the smell of something cooking — life.

Occasionally, although less often, I wake up wondering where I am. But Umbria really has become home and it gets easier making the transition each time. When I arrive I get to start on the other half of my life. Picking it up in mid sentence, as it were. And, one of the side benefits, there’s no need to pack socks and  underwear, its there ready to go. Like putting on a pair of comfortable jeans. Well, actually it is putting on comfortable jeans.

The dogs are used to it now and there is no hesitation as they dash up and down the stairs making sure their domain is still in tact. Rocco begs Puccini to chase him from the cantina to the dining hall while Puccini would rather search for the chewy he’s sure he left just over there and Venezia sits impatiently in front of  the food bin implying she hasn’t eaten in days. It’s back to normal, the Italian normal that is.

But what are the important differences?

The first is the cast of characters is different. These are all new people in my life so the sense of history I have back in New York is not quite there. I insist that every 50 years or so we’re allowed to change our life completely. (Don’t you think? It’s the midway mark after all, and not like I don’t go back and visit.) It’s just something new and challenging. 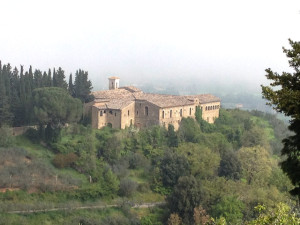 Along with a change in the cast of characters is the change of scenery. OK, maybe that one should go first but, never mind. Instead of listening to the sirens, the cross-town bus stopping under my window, and the crowds as they empty out of Dallas BarBQ, I now hear crickets. I know, I know, as annoying as that may be, you get used to it — you have to. And, as much as I love Manhattan, somehow waking up with the sun streaming through a window with a view I never tire of — olive trees dotting the hill and clouds gliding over the valley. I’m gonna have to say this is quite a lovely change of pace.

I can’t decide what goes third. It’s either the language issues or the food. I’ll go for the food but then again, this could be number one as well.

How does one describe to a blind person what its like when someone flips the main switch and suddenly the lights go on? (Do you remember in the beginning of Young Frankenstein when Gene Wilder is conducting an experiment on the old man by putting a clamp on the old guy’s neck stopping impulses going to his brain. He then knees him in the groin and doesn’t get a reaction. But when he takes the clamp off? POW in the privates!) Yes, that’s it exactly! Suddenly you taste food again.

This last time I was back in New York my mother had stocked the refrigerator with things she knew I liked. Then, kind of glum from knowing the culinary ‘reentry’ would be difficult, I was mindlessly cooking some [what Americans call] sausage. When I sat down to eat it I swear, if you had blindfolded me I wouldn’t have been able to tell you what I was eating. That’s just an example of the taste difference across the board. If it weren’t for the Umbrian olive oil I bring back, I don’t know if I’d make it through the winter.

The most difficult thing is probably always going to be the language part. I start out with the best intentions of studying and practicing and not slipping into English. Hoping that each year I’ll get better and I do get better. I make better mistakes in many more tenses than I used to. Ok, it might not be that bad but it is still at the center of most of my insecurities here.

Funny thing, and I’ve heard this a couple times over the past few years, some people mistake my shyness for aloofness. I don’t always engage everyone in conversation while walking around town out of insecurity and instead stick to ‘ciao’ and the expressions that can be answered easily and not involve a conversation.

For example, “Tutto OK?” (Everything’s alright?), “Tutt0 a posto?” (Everything in its place), or “Come stai?” (How are you?), or “Stai bene?” (Are you feeling well?), can easily be answered with one word repeated a few times “si, si, si, si,” (four times seeming to be the norm). Or statements like “Che bella/brutta giornata”  (What a beautiful/ugly day!), can replace asking how someone is as long as they are appropriate.

“Ti trovo bene” (You’re looking well) is always a good way make the person you’ve greeted feel better and get you in and out easily. (A win win situation for sure.)

Oh, oh, then there’s the ever popular “How To Respond to Hello” game. If someone says “Buongiorno” you can respond with the same, or maybe “grazie.” or “buon di”, or the even curter “di”, if it’s combined with a nod. (May men like this combination.) You can also respond with “Ciao” if you know the person which, if you don’t, could be a serious preach of protocol.  The game part is that no one ever responds with the same thing you said to them. Then there are all the lilting variations that give each response a life of its own. There’s even what I call “the Accusitory salutations.” That would be any of the above directed forcefully and with intent of startling the wished one into responding to you. Try it in English too and see the reactions you get.

However, the biggest difference is probably in me.

One of the most difficult things I’ve had to tackle is in reinventing myself. The chance to start over is a wonderful thing we Americans are more easily able to do than most of our Italian counterparts. Well, maybe easily is not the right word because this certainly hasn’t been easy.

Statistically, most Americans die within 50 miles of where they were born. Well, I’m determined that that not be the case. (To that end, I’ve told everyone to ship the ashes back to Blauvelt and have left notes around the house in English and Italian to that affect.)  I wanted different and here it is.

Maybe I’ve just landed in a whole new world. What was previously the out there is actually not so strange. Once here, its not as scary as I imagined but amazingly wonderful. My life is filled with new opportunities to discover and explore. Of course lots of the discoveries have been about me and what I’m made of — and that’s a very good thing too. I’ve got the next 50 years to figure out who that person is. Till then, I’ll enjoy the sausage, salami, and mortadella, fried blossoms stuffed with mozzarella and anchovy, Sagrantino Passito, and the best olive oil I’ve ever had.

I have discovered the grass is indeed greener on the other side and it comes with a view of Assisi.