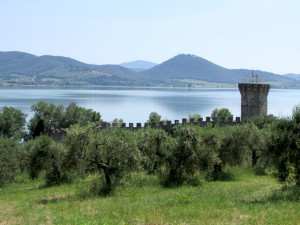 When driving from Florence to Perugia, you will pass Lago Trasimeno. Being the largest lake on the Italian peninsula its kind of hard to miss as the highway skirts the northern part. Historically an extremely important fishing center (Umbria is the only landlocked region on the peninsula) today it hosts many beautiful small towns, some of which are picturesque tourist havens. The largest on the northern shore is Passignano and looks very much like an Italian resort town. There are restaurants, hotels, ceramic shops, and (good) gelatorias along the park-like shoreline around the pier for the ferry to the main island of the lake. [At this time of year, the Tropical gelateria is serving absolutely rich and intense fruit flavors like frutti di bosco (summer fruits), mirtilli (blueberry), lampone (raspberry), and ananas (pineapple). Has anyone noticed that gelato is always a topic of conversation with me in Italy?]

Anyway, Passignano is lovely. There is a medieval tower with a view of the lake and close-in islands.5.30 euro gets you a round trip ticket to Isola Maggiore and it is a wonderful day’s outing. (Although it’s only about a kilometer away, the boat stops in Tuoro before heading to Isola Maggiore.)  Once on the island you seem to step back into another era. The island has much the same appearance as it must have had a hundred years ago. Well, probably a little more spiffed up. The wide bricked main street  —Via Guglielmi — is tranquil and pristine. There are two churches right near the boat dock that are lovely and quite a few restaurants for lunch. But first there is an island to explore. 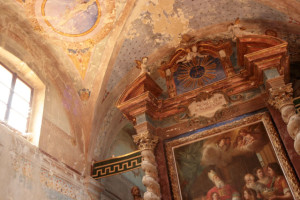 The church I found most interesting was the Church of the ‘Buon Gesu.’ I had never heard this name before and wasn’t sure if my translation of ‘Good Jesus’ was correct. Apparently San Bernardino and the Observant Franciscans had something to do with this and warrants more investigation. Anyway, the church is charming in rather a ‘shabby chic’ kind of way. Faded 19th century wall paintings are the backdrop for a late Baroque altar with Berniniesque columns inspired by those of Saint Peter’s in Rome.

Although I most wanted to see the church of San Michele Arcangelo, I had been warned that the way is quite steep up on a very bad stone and gravel path. Instead we walked left, around the corner, up the stone steps to the simple church of San Salvatore. The 12th century Romanesque style church has a center nave and very little decoration left — still quite charming. The path to the right lead us upward until the gable ended bell tower of San Michele came into view signaling we had reached the summit of the island. Beautiful views abounded. A slight entrance fee got us into San Michele and it was worth it. The frescos are lovely and some of the most important surrounding the lake, proving the importance of the Observant community here. However, I thought the mid 15th century wooden crucifix by Bartolomeo Caporali the most beautiful work in the church. (It reminded me of Benozzo Gozzoli who is also represented in Montefalco.) 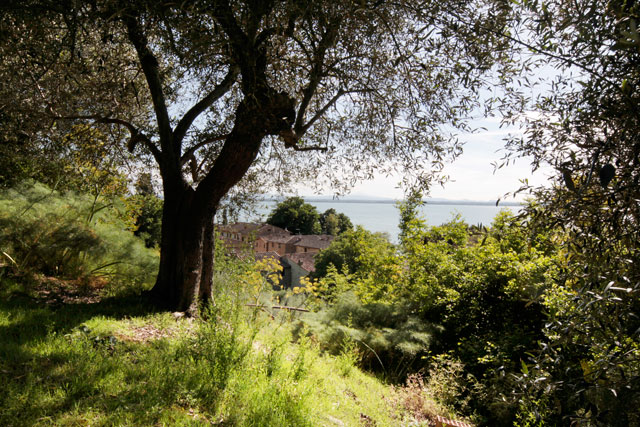 After the church I headed down the hill to the left passing under many very old olive trees. Interestingly, as I was taking some photos of wandering pheasants and getting too close to the trees, the sound of whirring startled me. When I looked up the trees were filled with the largest mosquitos I have ever seen. I got back to the path and quickly moved on.The rest of the walk was beautiful through trees and catching glimpses of the smaller island and the lake. Finally arriving at the shore, the walk along the water was quite lovely. The path leading right to the old Franciscan monastery was closed so I was not able to explore that further.

[However, the monastery is part of the very interesting story of the island. It was purchased in 1887 by a wealthy marquis from Civitavecchia who turned it into a grand villa/castle in the Neo-Gothic style. In the early 20th century the marquis and his daughter, Elena, began a school of lace making to give the island’s daughters ‘dignified work’ to occupy themselves and stimulate the economy here. Their ‘Irish’ lace became know far and wide examples can be found of their crochet-hook work in the museum on the main street.]

By this time we were hungry and chose Ristorante L’Oso (Via Guglielmi, 39) for lunch. We had a table right on the water and had a wonderful fish meal. Simple delicious. The 3:30 boat brought us back to Passigniano and some gelato. All in all, a perfect day. 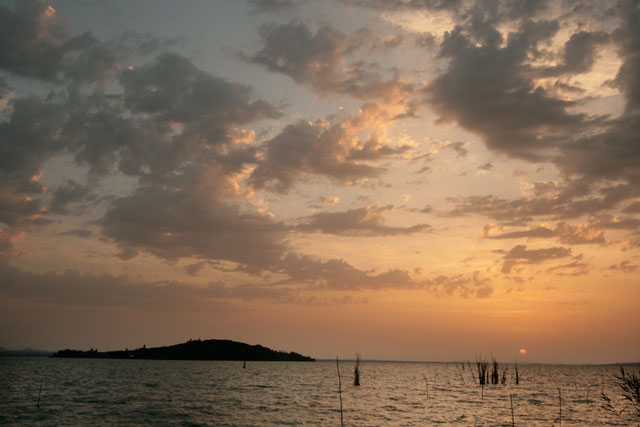