That it weighed in at 1.89 kilos (or 4.16 pounds) is one thing. That we braved a frigid morning driving an hour and a half to see it in person was quite another. Arriving early, amazing in its own right given the commuter traffic we encountered, we were soon warming ourselves and chatting over watered down cappuccinos on the 10th floor of Sotheby’s Auction House on York Avenue in Manhattan, waiting for the unveiling.

Of course the conversation was about truffles.Knowing that most white truffles are from Piedmonte, it was exciting that this enormous specimen hailed from Umbria – my region. Julia, Nat, and I speculated what one could do with more than 4 pounds of truffle. Given that it had a shelf life of a little more than two weeks (if cared for properly), whatever one was planning, the buyer would need to get the invitations out fast.

“Tagliatelle for thousands,” said Julia. She recommended a simple butter sauce with shaved truffles on top.

We paused to call up the image, aroma, and taste from our culinary data banks.
“Gnocchi in a cream sauce topped with truffle,” added Nat.

We agreed that would be divine too. 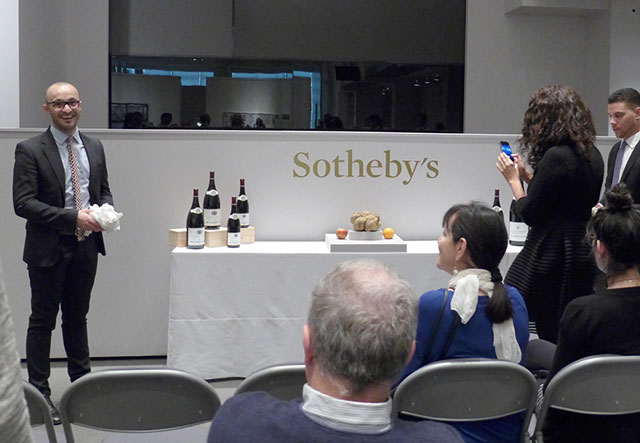 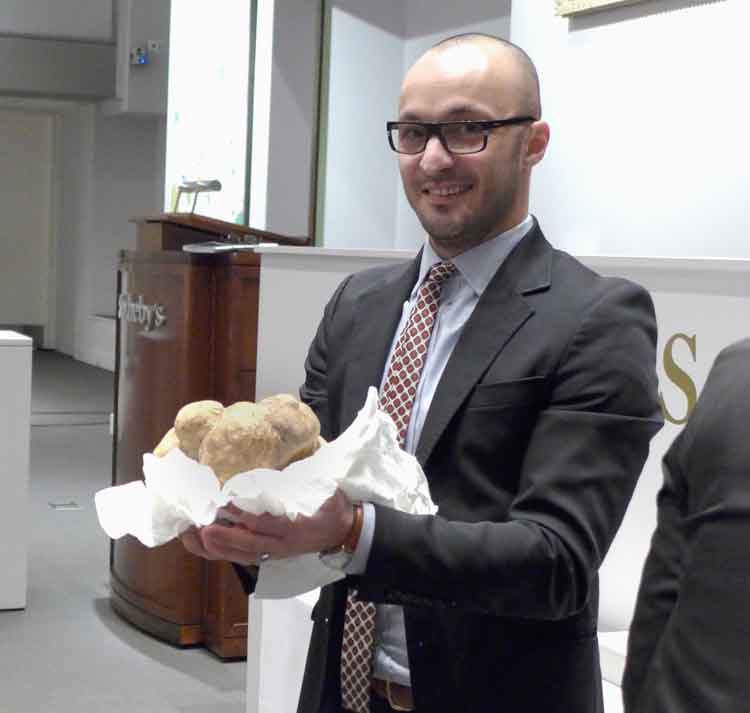 They turned toward me to see where my truffle fantasy lay. I needed to pause a tad longer because their two suggestions were two of my favorites as well and I was thinking about the gnocchi covered in the cream sauce nestled in a parmigiana basket. . . However, It didn’t take long for my face to brighten as I almost blurted out.

“Scrambled eggs with barbozza.” This time I thought I heard a little gasp. But that could have been me.Although simple, I’d at least want a couple servings of an over the top, Umbrian style, bacon and eggs. Yes, we Americans are traditionalists even where truffles are concerned.
Agreement and nods all around.Our fantasies all leaned on the simple side – Julia says that classics are “classics” for a reason – knowing that letting the fresh taste of the truffle come out was the important thing. Then we all sort of glazed over in our own little happy food places while we drained our cappuccinos.

At 9:30 we headed down to the Seventh floor for the event.We were directed to the front of the auction room where about 20 people were standing near a long table beneath a large gold Sotheby’s logo. There was a small platform in the center of the table flanked by an apple, an orange, and various size bottles of wine that, we were told, were part of the following day’s fine wine sale. (Any of which would make a lovely compliment to a truffle dish, it was pointed out.)Introductions were made and Gabriel Balestra, family member and representative of the Umbria truffle concern that was in charge of the World’s Largest White Truffle, spoke proudly of the discovery, the truffle hunter, and the well rewarded truffle dog who really was the hero of the story.After a brief Q & A about truffles, the moment we had been waiting for arrived. Two men brought in a square black and metal trimmed carrying case. (I half expected to see it hand cuffed to one of them.) They opened the box and produced a striped cloth bundle about the size of a foot ball. Placing it on the table they carefully unwrapped the cloth and moist paper towels to reveal the enormous prize and placed it on the platform between the apple and orange to the clicks of professional cameras and smart phones.

It had flown halfway around the world from it’s humble beginnings buried beneath a gnarled old tree deep in an undisclosed public forest in an undisclosed corner of Umbria to arrive on New York’s Upper East Side to be, for however briefly, the talk of the town.
We were allowed to get up close. To get our “I can’t believe I’m actually in front of the WLWT” shots. Someone even took a selfie with it, which I thought was a bit much. When the paparazzi had backed off, I approached and waved my hand over it to bring the distinct truffle whiff my way.

“How wonderful,” I said. To which Gabriel nodded approvingly.

A few more questions and photo ops and it was time to put the WLWT back in it’s case. We were told it could only be out for 10 minutes so it would not loose moisture and therefore, precious weight. It was then rewrapped with the same care and placed back in its special case to await its future, which would mean, of course, its demise.

On the way back to the parking lot, we speculated as to how much the WLWT would bring. The buzz was that an offer of a million dollars had already been refused.
We wondered how high could it go and each of us gave a guess. Being a pessimist, I wanted to say $100,000 but weakly yielding to peer pressure and auction house hype and instead said $250,000. The world was fickle and this was New York after all — a place where one could even be talking about spending a million dollars on an Umbrian fungus in the first place. 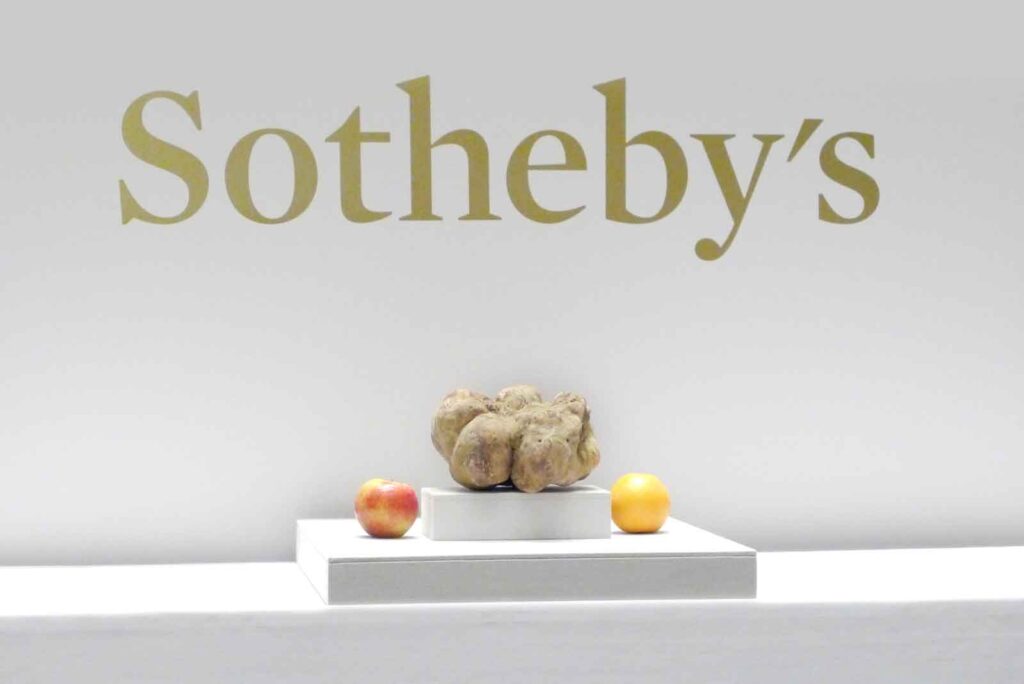