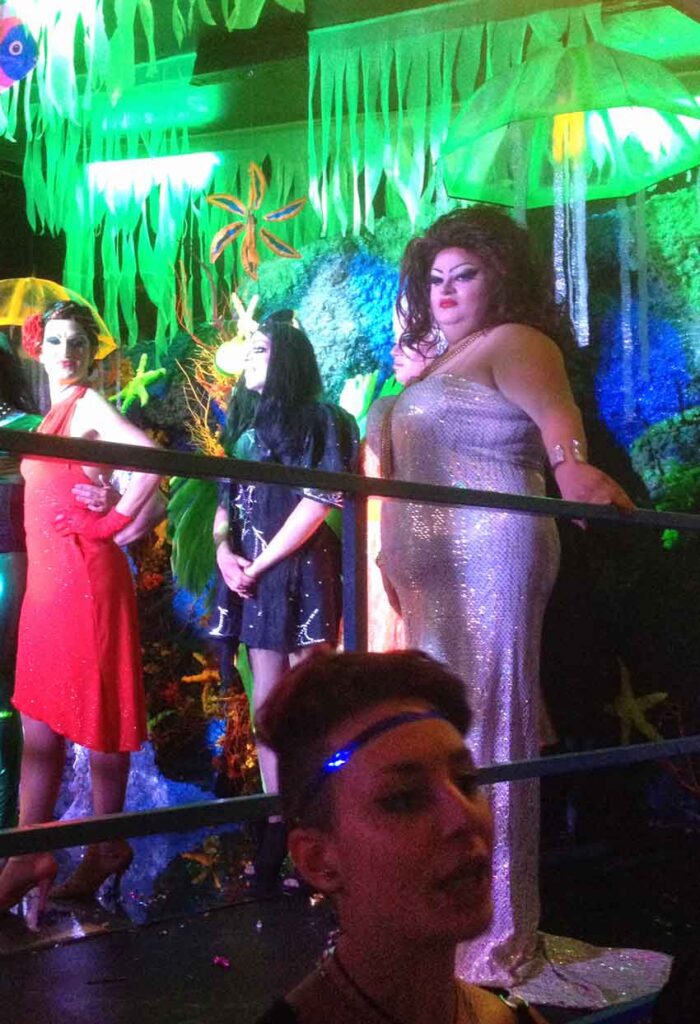 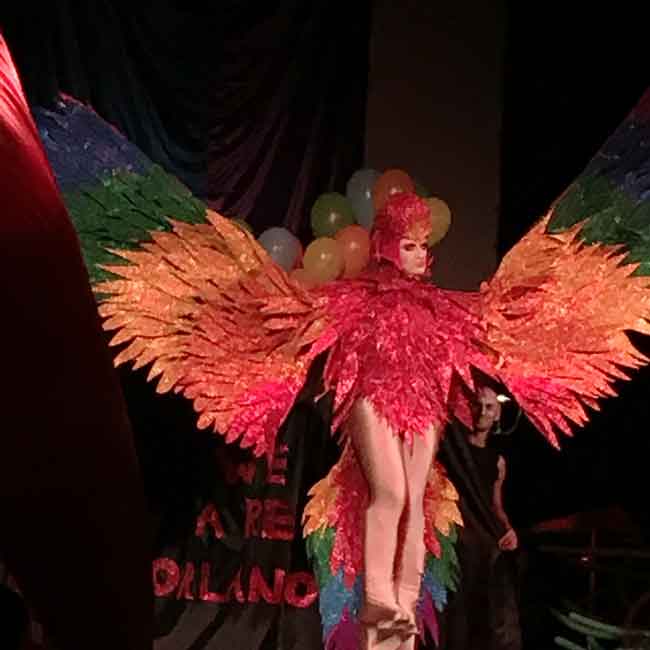 First, a little background on fitting into the gay scene in Umbria. Remember there is the constant uphill battle with the language and the use of witticisms that are more difficult for me to catch. The first time I dipped my toes into the party scene, it was at a club called the Lido (which means beach).

The Lido is located in a seemingly deserted area on the outskirts of Ponte San Giovanni, a suburb of Perugia, near the namesake bridge. I assume it’s where it is so the noise of a nightclub isn’t a problem for neighbors. It has a large pool (hence the name) and too often a double helping of tacky décor. (Too bitchy still?)

OK, I’ll confess, Club music has never been my thing so I’m not the best judge. The pre-drag-show musical lineup is more to my taste with multiple Madonna hits played to the delight of the elders who, like me, tend to arrive early (and in which I am quickly becoming ensconced). Judging from the smiles all around, there doesn’t seem to be any language barrier with Madonna playing.

The walls of the dancing area are bathed in washed out videos in front of which various muscled or dragged out club boys gyrated —the only plus as far as décor goes. The place is typically too smokey and loud and I usually got there too early and left after I could stand being yelled at no more— which took about an hour and a half.

The second year I reluctantly returned to the scene of the crime but noticed that the décor had changed significantly for the better. New bars were added with lighted-glass fronts maybe so us older gays could find them easier. (Yes, I know, still too bitchy.) A tent had been put up that covered the dance area providing an enclosed area but still open so people could continue smoking (typically Italian). However, the people seemed much younger than I remembered. What didn’t bode well was that there were many more women than I remembered and they were too small and pretty (I know definitely not PC) to be drag queens or transsexuals. They actually seemed to be straight women. The dead give away was when a bevy of attractive young men asked them to dance and they all did — together.

Damn that gaydar. I was in the wrong place.

I went up to the brooding bouncer-type and was told that the gay party was next door.

Upon entering the confirmed gay club, I was greeted by the familiarly tacky décor and muscled boys dancing in front of a distorted video of Disney’s Aladdan and the Lamp. Apparently the owners of Lido had upgraded and turned half of it into a straight club and renamed it Cielo (which means heaven).

And there was the Lido I remember with its carpeted amphitheater-like seating, wandering spotlight and anemic disco ball. I half heartedly gave it the once over and noticed two gay men older than I was staring at a leather clad young man seated center of the amphitheater. It was too much to bear so I left and boycotted the events for the rest of the year.

In my third year here, they moved the whole thing to a deserted street at the far end of an industrial zone over near the Perugina Chocolate factory and called it Tu Candela. (It had to be explained to me that it was a reference to a penis.) The decor was much better and the drag queens and clientele were somewhat familiar although I would probably have recognized more of them if they took their pants off. (Meaning they show far too much on their profile pages.)

Here at least the video projections were better and, one night, Lady GaGa filled an entire wall with a long playing version of Bad Romance while we danced beneath it. It was my favorite part of the evening and seemed, appropriately, to become a gay anthem. By this time I had met a new group of people and going out was more fun the few times I went.

A straight woman friend from Bettona invited me to a night out. Saying only that I’d enjoy it. It turned out to be Omphalos party at a swim/night club in San Niccolò di Celle. (I met Luca there so the club has the dubious distinction of being the notorious starting point of a tortured love affair that did not end well for over 6 years.) The evening was really great fun and ended with lots of people stripping down to their underwear and jumping into the pool. Surprisingly, I join in the fun and returned home happy, hopeful, and damp. I thought this might be the year.

A couple months into my destined to be a disaster romance, friends said we should all meet at the Lido, where the dance nights had returned for a well publicized BeQueer event. I arrived at what was tastefully tardy to me at 12:30 and walked into a club deserted except for a band setting up, a DJ adjusting his lights, and people bringing ice to a shabby unlit bar. At least I thought a live band would be a welcomed change. But again, something didn’t seem right. After a few minutes I texted Luca who told me he was there, looking for me.

The place is not that big and after a few minutes I realized that, damn, I did it again, I must be in the wrong place. Luca texted to meet him at the door.

I went outside and, you guessed it, there he was standing in front of the door to Cielo.

So the tables had turned once again and the LGBTers had finally gotten the nicer club — at least for the night anyway. The place was already starting to busy up and groups of people were talking around the pool and the line at the lighted bar was still thin. We went and ordered Long Island ice teas — believe it or not, a first for this New Yorker. Luca, who was kind to worry about my not knowing anyone, walked me around and started to introduce me to a couple just past the (tacky) Tiki bar. But before he could, one of them turned and said, “Michael, come stai?” and the other shimmied over to give me an exaggerated air kiss. “Ciao bello.” 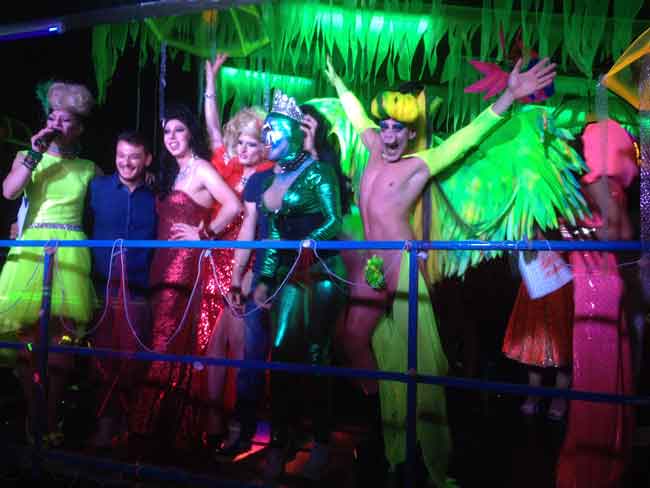 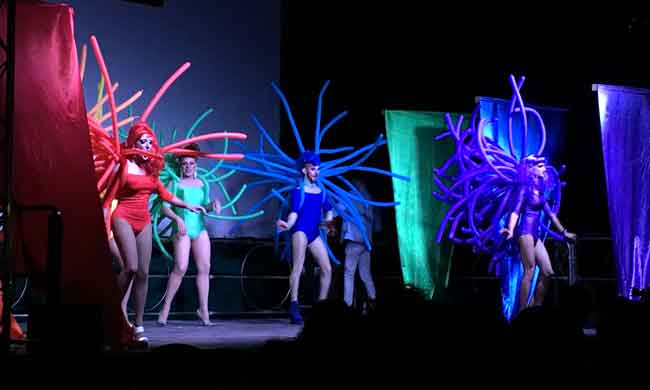 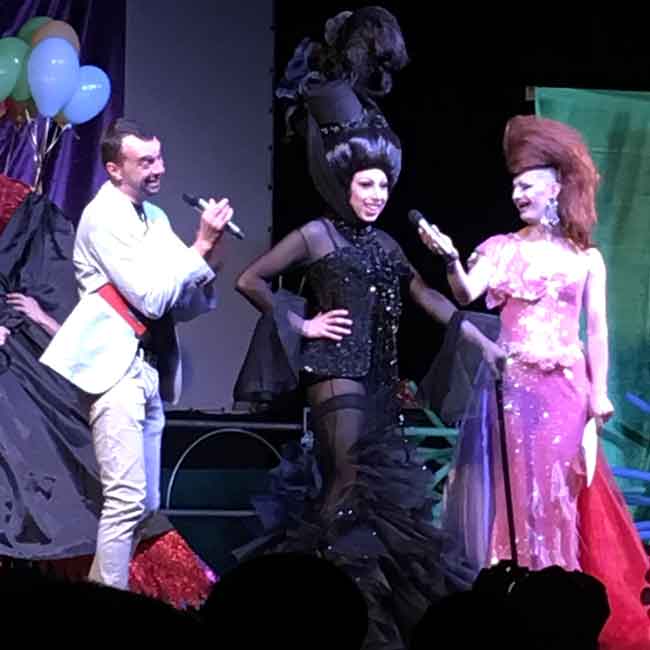 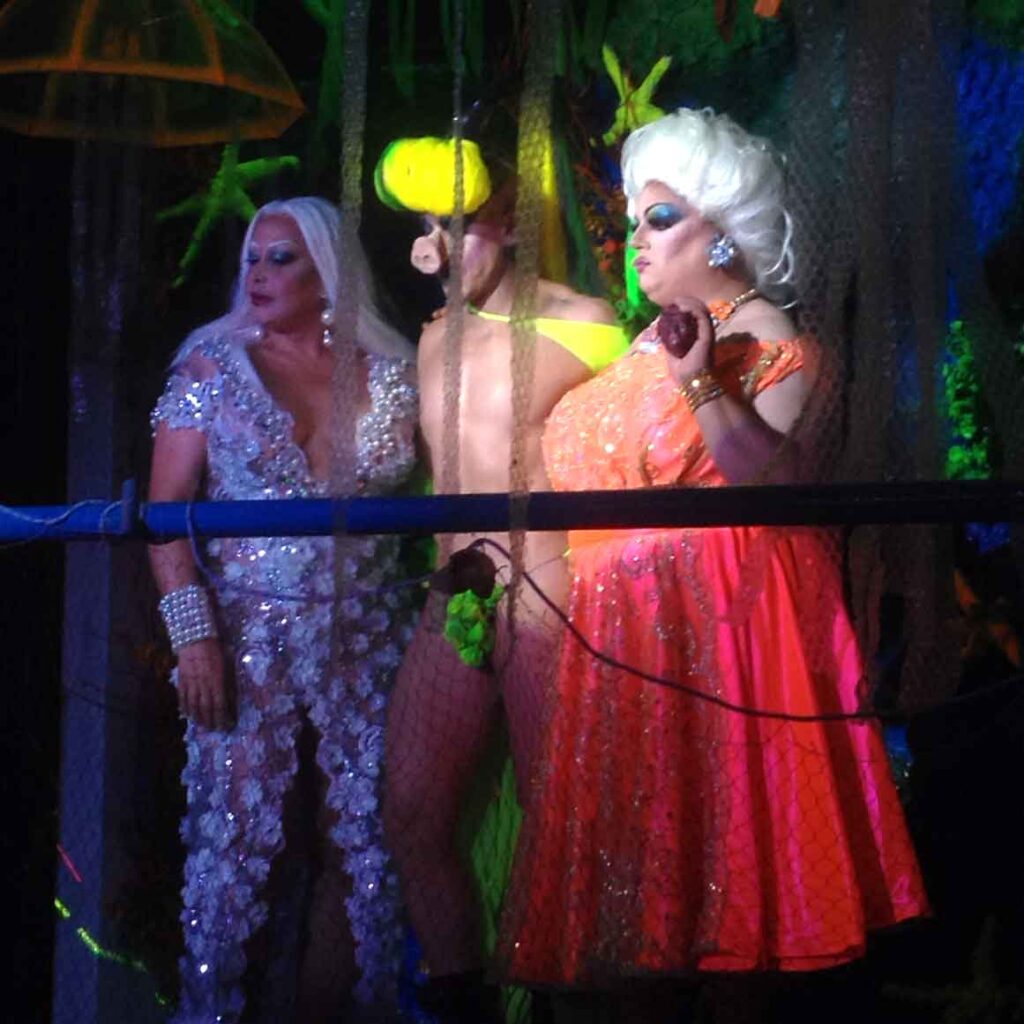 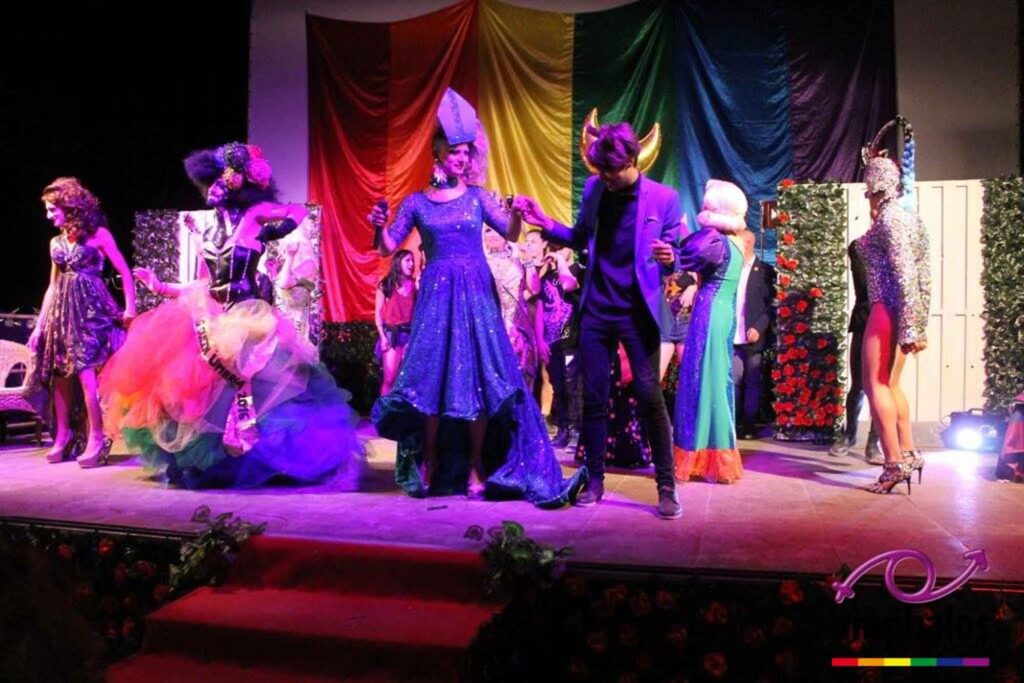 At the next grouping, I asked Luca if he knew Giampiero, Tiziano, and Marco — he didn’t. As we were passing around introductions, Sergio skirted around our group on his way to meet up with Manlio (who waved) and his new boyfriend, Roberto, who were on line for the bathrooms with someone I didn’t know. Then we ran into Michele, who sported a tattoo I had not yet seen, and Andrea, who introduced us to two people I had seen but not met. Turning, we all gaily received more air kisses from Ivo who was waiting in line at the second bar with some fresh-from-the-seaside tanned men. It was August, you know, and bronzed boys abounded.

When we finally passed around to the dance floor, I felt someone’s arms around my waist and turned to see an old heart throb, Daniele, who dragged me (not difficult at all) onto the dance floor. When I emerged from the Marlboro cloud three loudly pulsating songs later, Luca told me he didn’t know why he was worried about me. I could apparently get on just fine.

Later in the evening there was the obligatory drag show led by the mistress of ceremonies, Nikita. However, this was a special night dedicated to She Wulva — as vulgar a name as anyone could come up with and means exactly what you think it does. I found out later that the party was to celebrate her coming in second place in the Miss Italia Drag Queen contest, which was apparently enough of a reason to throw a party. A large group of other drag queens (of various proportions and window treatments) were paraded onto the stage in the middle of the pool and we were yelled at for about 45 minutes. Nikita, swathed stunningly in a black strapless that I was told she made herself, commanded most of the attention (as is her way) the whole time. However, I was more captivated by an Amy Winehouse wannabe bartender with a ratty blonde wig — “Vorrei un altro Long Island Ice Tea per favore” —who I had to tell I thought was divine.

We all danced, flirted, and tried to talk until I was hoarse and the ringing in my ears was too loud to bear any longer. At 3am I called it quits (ma dai! no!) and headed back to my quiet refuge in Bettona.

So, slap me silly, I’ve discovered that I actually can have fun here.

Note to self after I saw the photos the had posted on Facebook, when shooting drag queens, one should refrain from using a flash. It’s kinder and they’ll only thing you’re being malicious.

For help planning your own gay vacation, contact Michael at info@aweekinumbria.com