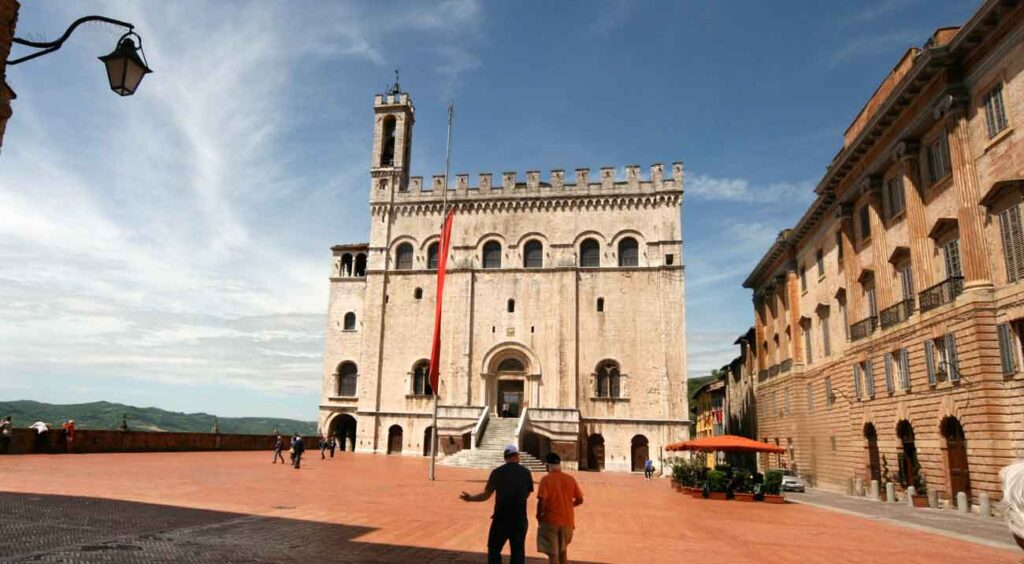 Fabulous Medieval city with a Roman past 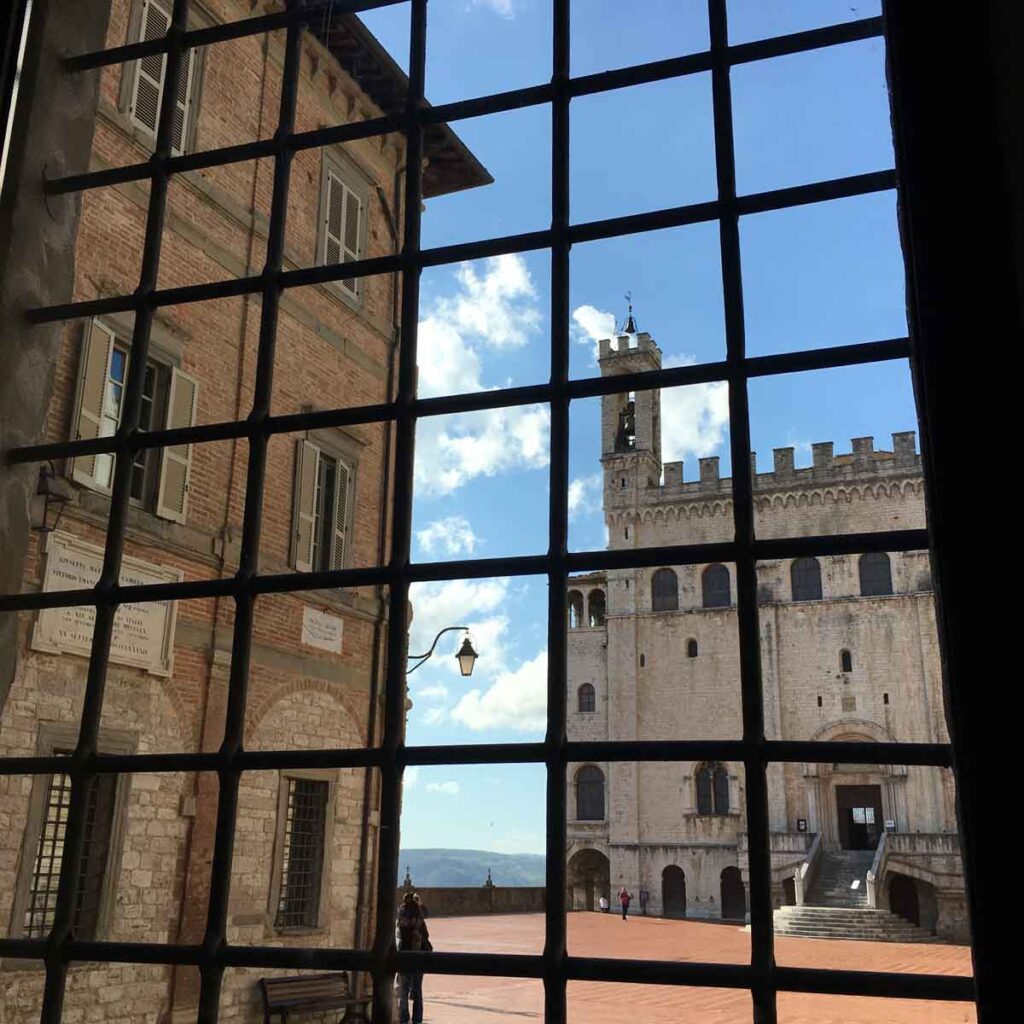 To many, Gubbio, a spectacular medieval hill town on the way to le Marche, is famous for the Corso dei Ceri. Every May 15th the town is inundated with visitors to witness the ritual that has its roots in a pagan Umbrian Running of the Bulls. In the heated competition, three teams, devoted to St. Ubaldo (the patron saint of Gubbio), S. Giorgio, and S. Antonio, race through enormous crowds from the main square up the hill to the Duomo. Each team carries a statue of their saint mounted on a wooden octagonal prism, or ceri. 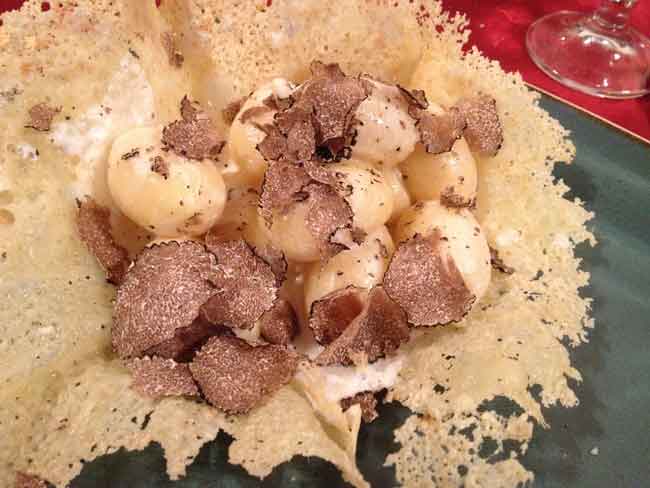 However, there are two things that are high on my list of reasons to visit. Since I so often associate places with specific foods, for me Gubbio is the home of the most amazing gnocchi stuffed with truffle cheese in a truffle cream sauce. Oh, and they serve it in a small basket of Parmigiano cheese. It doesn’t get much better than that. After eating at my favorite restaurant (il Bargello) it is also customary for guests to run around the fountain just outside. Three circlings and you become an honorary citizen of Gubbio. Or, is it that you are certified ‘pazzo.’ I’m never quite sure which. (I got my cousins from Sicily to run around the fountain when they visited last year. Go girls!)

The second thing I love about Gubbio is actually for a personal connection with New York. The Metropolitan Museum of Art, famous for its period rooms, possesses the amazing Gubbio Studiolo. (Its nestled in a small corner just off the maid medieval hall on the way to the American Wing.)  The studiolo (1478-82), whose walls are covered in intricate inlaid wood, was built for Federico da Montefeltro (you may recall the famous double portraits by Piero della Francesca now in the Uffizi in Florence). On my first visit to Gubbio many years ago, I was met with an empty room and two signs showing what the studiolo looked like. While I was pleased that I knew the studiolo well from working at the Met for many years, I was saddened that this great work had been ripped from its rightful home. Fast forward a few years to my next visit to Gubbio and OMG there was the Studiolo. Well, a stunning replica of it anyway. And  installed to quite a beautiful effect.A little background: The city is an ancient one with it’s origins in the Bronze Age. Its first known inhabitants being the Umbri prior to the Roman conquest of the 2nd century BC. The famous bronze Eugubine Tablets are the largest surviving text in the Umbrian Language and can be seen at the Palazzo dei Consoli museum.

The town came to promenance by sending 1000 knights to fight in the First Crusade lead by Girolamo Gabrielli, a member of Gubbio’s famous family. It is said that this group was the first to enter the Holy Sepulchre (1099) when Jerusalem was captured. The family played a role in Gubbio’s history for the next 500 years. As traditional Guelphs (supported the Papacy) a most notable member, Condottiero Cante de Gabrielli da Gubbio, as Podestà of Florence, exiled Dante, thus ensuring his lasting notoriety. 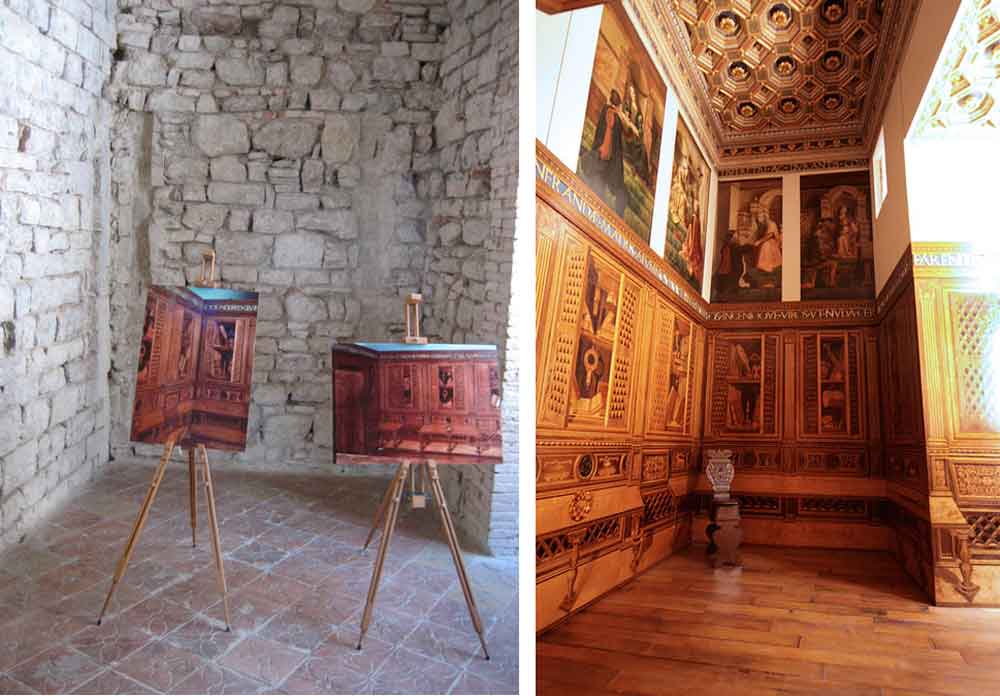 PARKING: There are several main parking areas in Gubbio. The easiest for access to the center of town (Via Repubblica, 2, 06024 Gubbio PG, Italy) is just at the base of the hill leading up to where you want to go.

On your handheld, click View larger map for directions. You will be given a token and then pay when you come back.

If that parking lot is full, or if you’ve arrived on a Tuesday when their open market is in full swing, you can usually find space near the Teatro Romano