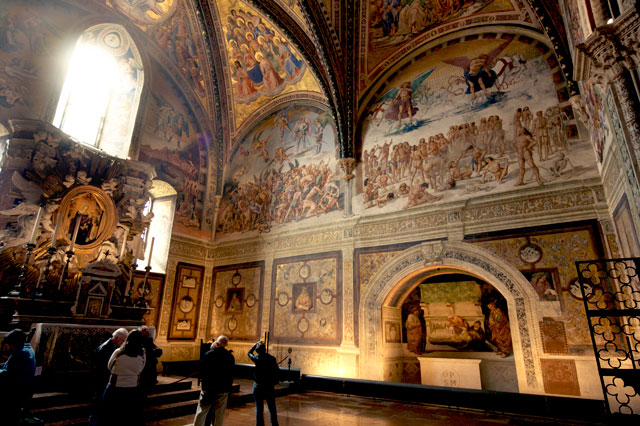 Refuge of Popes and Home of Luca Signorelli's Masterpiece

Orvieto is situated on the flat summit of a large volcanic butte of almost vertical tufa stone. (The stone is noteworthy because it is easily carved and becomes harder when exposed to air.) The city’s stunningly dramatic location allowing its spectacular cathedral to be seen from a great distance.

Orvieto was certainly a major center of Etruscan civilization as the archaeological museum houses some of the Etruscan artifacts that have been recovered in the immediate vicinity. Orvieto was annexed by Rome in the 3rd century BC. After the collapse of the Roman Empire its easily defensible site gained new importance and the Bishop’s seat was transferred from Bolsena. Sitting on its impregnable rock controlling the road between Florence and Rome, Orvieto became an extremely important town during the Middle Ages.

From the 11th century onward, the popes maintained an active political presence in what was to become known as the Papal States. The Pope and his court moved about Italy and several cities had Papal Palaces, Orvieto being one (along with Viterbo and eventually Avignon). Pope Adrian IV (1154–59) was the first pope to spend significant time in Orvieto. Pope Nicholas IV (1288–92) chose Orvieto as the meeting place of the Curia and laid the cornerstone for Santa Maria Assunta (the duomo) on November 15, 1290, a feast for which the city had a long history of special devotion. During the sack of Rome in 1527, Pope Clement VII took refuge at Orvieto. Fearing a siege, he commissioned an ingenious well (the Pozzo di S. Patrizio) to be built. Designed by Antonio da Sangallo the Younger it is comprised of two ramps in a double helix so that the mules carrying the water jars might pass up and down unobstructed. An inscription on the well boasts “what nature stinted for provision, application has supplied.” 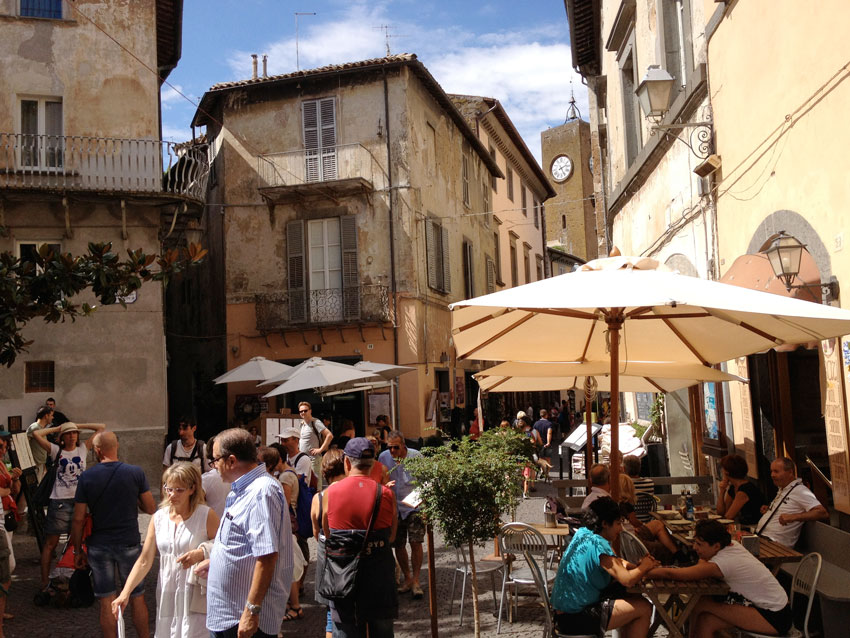 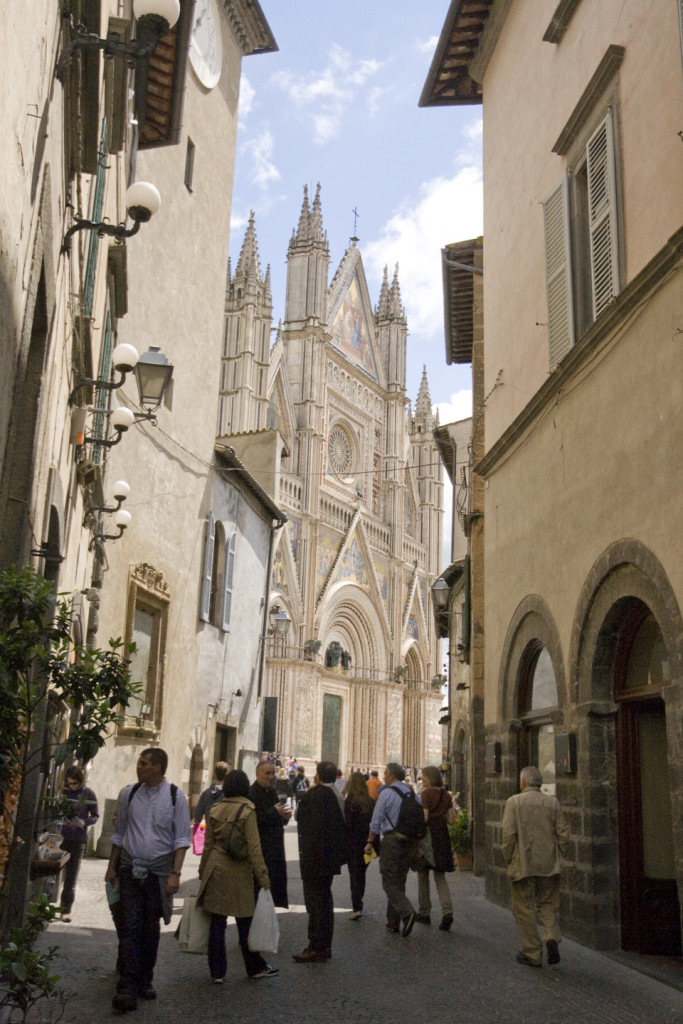 The church is striped in white travertine marble and greenish-black basalt in narrow bands. It is similar in many ways to the duomo of Siena and is one of the most important Italian Gothic cathedrals in Italy. The façade includes remarkable 14th century bas-relief sculpture by Lorenzo Maitani with scenes from the old and new testaments.

The church is most famous for two things housed in separate chapels comprising opposite ends of its transept. The left chapel contains the Corporal of Bolsena (The miracle of 1263 purports that a consecrated host began to bleed onto a corporal, the small cloth upon which the host and chalice rest during the canon of the Mass.)

The second, and for me the reason to visit Orvieto is the Chapel of San Brizio or the Cappella Nuova. The chapel already contained two works completed (the Judging Christ and the Prophets) in the vaulting over the altar by Fra Angelico of the 1440s. Signorelli was commissioned to finish the vaults and decorate the upper walles with frescoes of the Apocalypse and Last Judgment. These masterpieces were so talked about at the time that Michelangelo, when called by Pope Julius II to Rome to paint the Sistine Chapel, stopped in Orvieto to see the works.

Of possible interest to families with children is that beneath the city, carved into the tufa stone, is an elaborate system of rooms and passages. Encompassing hidden exits, store rooms, pigeon coops, and more, this intricate underground world is accessible on guided tours in Italian and English, among other languages.

PARKING: The best parking in Orvieto is actually inside the walls. Wind your way up the hill to Orvieto and make a quick right just before the parking lot you’ll come to. (If you park in that lot but you’ll have to prepay using the parking meter.) About two block up that street you’ll turn left into a parking garage. This way you pay for the amount of time you spend in town. There’s also a bathroom in the far left corner. (You’re welcome.)

On your handheld, click View larger map for directions. Make sure you take your ticket with you as you will pay at the machines upon your return.