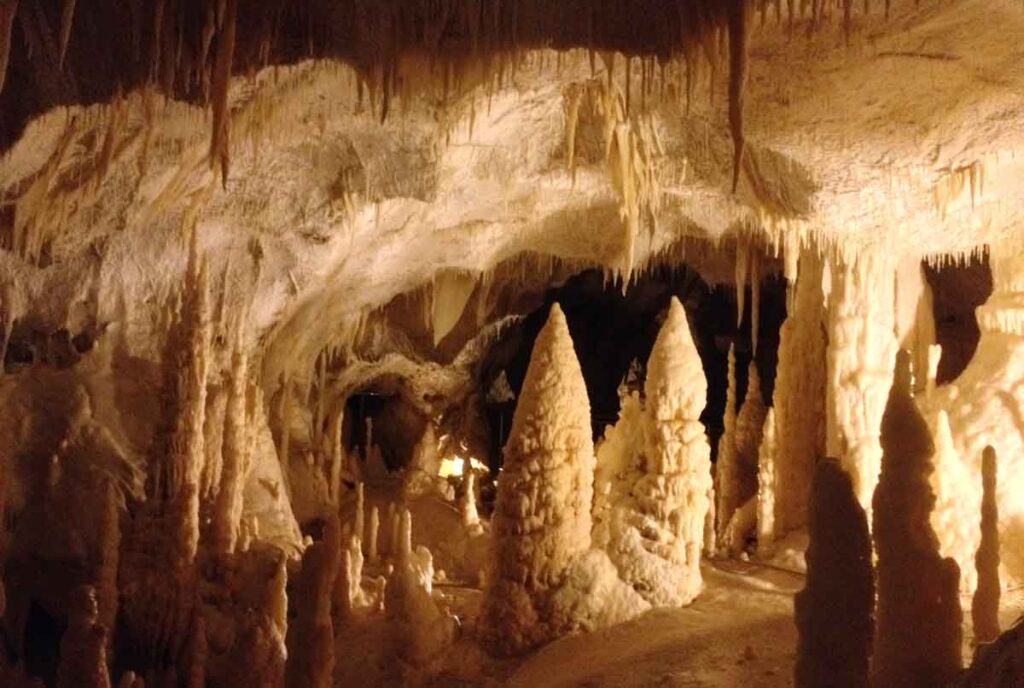 Venturing out of Umbria is occasionally allowed providing it’s a very special thing. An adventure to le Marche is certainly worth it so last week I set out with some friends. Destination: the caves called Frasassi.

It was about an hour and a half, not including a stop for lunch at a surprisingly spacious Autogrill along the way. (Yes, unlike in the US, you actually can eat quite well along the road in Italy. Fresh pasta with a choice of three sauces and everything.)

So we got there, parked, and bought our tickets, and then had to wait for our time slot to be called. (I recommend booking online frasassi.com) The parking lot is filled with souvenir shops filled with all kinds of everything for the tourists — T-shirts, hats, kites, books, chocolate, and worse.

Anyway, after the wait and the short bus ride to the cave entrance (where there is another shop) about 30 of us were escorted down a long cool corridor and into the caves.

I was not prepared for how absolutely breathtaking they would be. After a slight introduction, we walked around a corner that opened onto an enormous cavern that felt like walking into Madison Square Garden – ok, maybe not quite that big, but BIG. The railed paths swept downward into the main chamber whose walls were bathed in yellow light with spotlights illuminating many of the most spectacular stalagmite pillars. (Of course, you know the difference between stalagmites and stalactites? Stalactites drip down from the ceiling of a cave and splash onto the growing stalagmites. If they do this for long enough they can become a column but that could take, according to our guide, 70,000 years.) There were enormous piles of rocks that accounted for the hollowed out cavern’s size and it felt as if you were walking through the site of some great underground avalanche.

We wandered through many paths, under a couple of boulders, past enormous and amazingly beautiful stalagmites, reflecting pools and slow trickling streams, and small vignettes that were all spectacularly lit. They truly were spectacular to behold. The marble-like, and often translucent surfaces, were actually made up of a variety of intricate textures as the acidic drips splashed and dribbled their way downward. With unending variations, and seemingly suspended in time, these slowly growing monoliths rise from the rubble and reach toward an unseen sky.

Although you’re not supposed to take pictures, how could I resist. There were 4 or 5 of us lagging behind trying to capture the beauty of this place. Yes, we were reprimanded but the results were worth it. How else could I show you guys how wonderful a place it is. It was my duty to capture it all digitally.

The tour was about an hour and a half for 15.50 euro, which was well worth it. I can’t wait to go back. Maybe next time I’ll take the 3-hour tour because they dress you up in brightly colored jumpsuits and hard hats. And who doesn’t like a little dress up when they’re spelunking?  I’d love to go again so, come, and we’ll do it.

For more information: frasassi.com or wikipedia.org

PARKING: There is a large parking lot for the caves. A reservation is usually necessary so call ahead.

A shuttle bus (Navetta) will take you up to the cave entrance.

On your handheld, click View larger map for directions. If the church is not open, which it most probably will not be, call the number on the sign and someone should come right over.