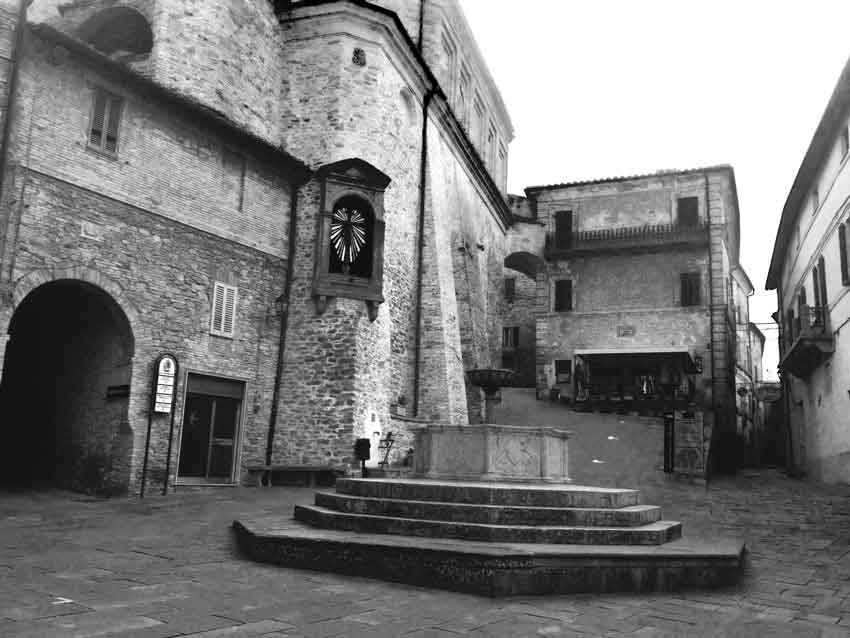 Panicale, the name is believed to derive from pani calet or to be in the heart of Pan thus attesting to its historic origins. Long before Etruscan farmers replaced the ancient shepherds and the Romans, in their turn, conquered the region, Panicale existed as a community. The earliest parts of the castle date to the 9th century, and by the 14th it was its own small city state.

By the 17 century the center of the town was filled in with houses and the beautiful piazzas we can see today were places of gathering for the people. Late in the 19th century the towns two moats were filled in providing gardens for the inhabitants giving some green respite within a former castle.

As with so many small towns you can discover in Umbria, Panicale is a perfect town. The rustic walls, buildings, and piazzas are perfect for black and white photography so I’ve shared some of mine with you. There are beautiful churches, craggy walls, and façades who’s patchwork of stone and brick seem to tell a thousand stories. The largest church, San Michele, is pictured in my photos and worth a visit.

But what brought me to Panicale – I have been wanting to visit for years but just never made it — was Perugino. Pietro Vannucci, aka Perugino, was born in nearby Citta della Pieve but he family originated in Panicale. One of the main reasons to visit Panicale is to see his beautifully restored fresco in the church of San Sebastiano, a short walk just outside the walls. You’ll have to find the nearby tourist office for schedule and to purchase your ticket. It’s rather easy and worth the trouble. 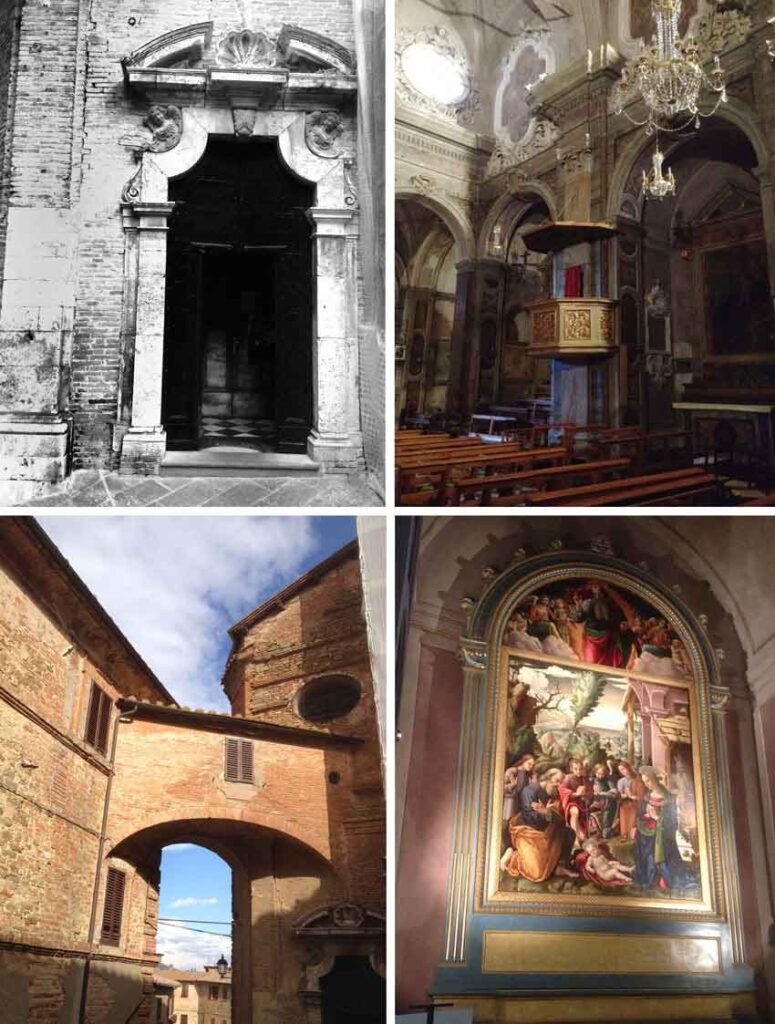 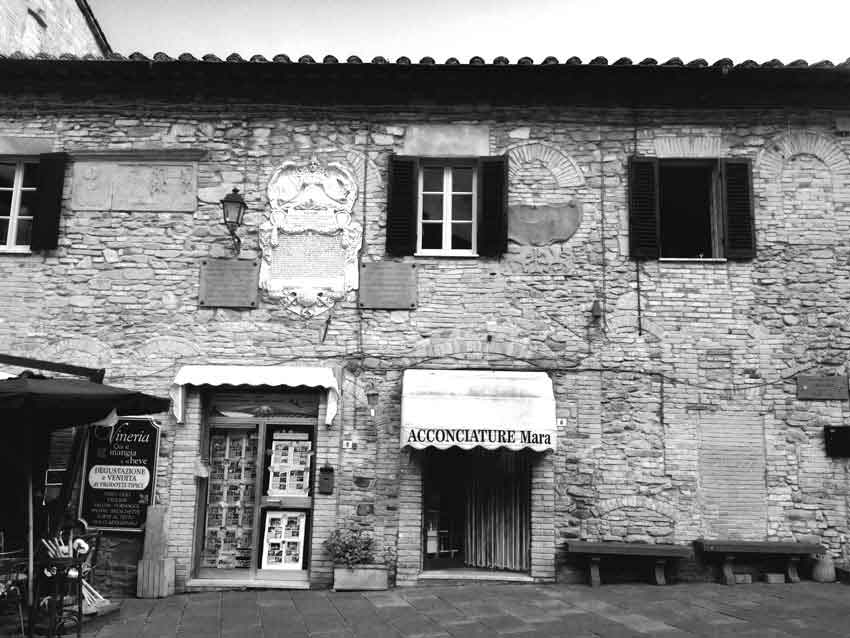 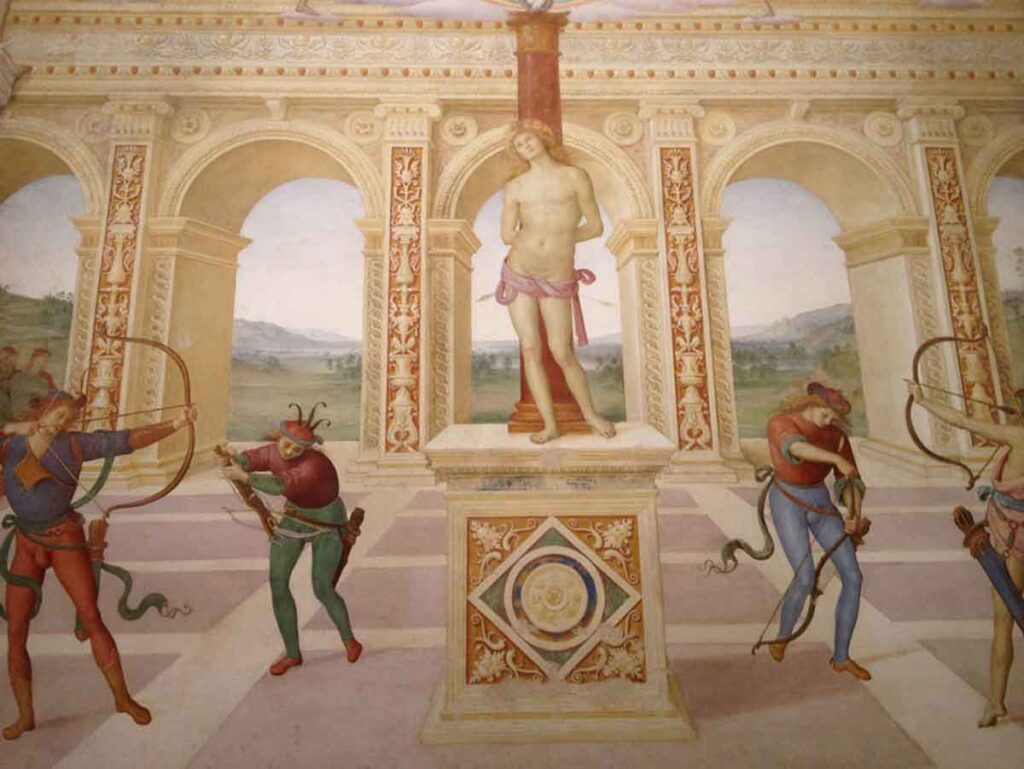 PARKING: Parking right across the street from the church housing Perugino’s tomb.

After your visit to Panicale, you might want to visit Perugino’s tomb in nearby Fontignano. (Use your GPS and pay careful attention.)

Perugino  was working in the area between 1520 and 1522 — most notably on the fresco in San Sebastiano in Panicale. He had completed a small Virgin Mary with Child in the Church of Annunziata (wall on the right side of altar). He had not yet completed a Nativity and the Adoration of the Shepherds above altar gallery when he died of the plague. (The Victoria and Albert Museum now possesses the original fresco. A replica is shown in the church.) He was buried nearby, as was normal with plague victims, instead of being return to Città delle Pieve, his birthplace, or Perugia, from which his name is taken. So the great painter is to be found in the humblest of churches. In 1940 his bones were placed in a simple marble monument on the right hand side of the church.

This jaunt to Fontignano has got to be one of the most difficult Umbrian expeditions I’ve set out on so finding his tomb was somewhat of a triumph. (Even with the GPS.) The church is so nondescript I actually passed it twice. (Look for the large cypress trees out front that nearly engulf the building.)  However, to stand inside this simple church and spend a moment in front of his ossuary was certainly worth the effort.

PARKING: The best parking in Orvieto is actually inside the walls. Wind your way up the hill to Orvieto and make a quick right just before the parking lot you’ll come to. (If you park in that lot but you’ll have to prepay using the parking meter.) About two block up that street you’ll turn left into a parking garage. This way you pay for the amount of time you spend in town. There’s also a bathroom in the far left corner. (You’re welcome.)

On your handheld, click View larger map for directions. Make sure you take your ticket with you as you will pay at the machines upon your return.